At the airport Nick, the driver was already waiting for us. He transferred us to our accomodation. When we arrived and got through the entrace, we were mesmerized from the very first second. Beautiful colors and green everywhere. The good vibes already in the air. Kathi, a member of the staff made our check-in and showed us to our private surf shed. It was beyond our expectations. A huge, tastefully furnished villa with two floors, a bathroom, tropical shower and a tube made of stone, a terrace and piles of pillows were waiting for us. 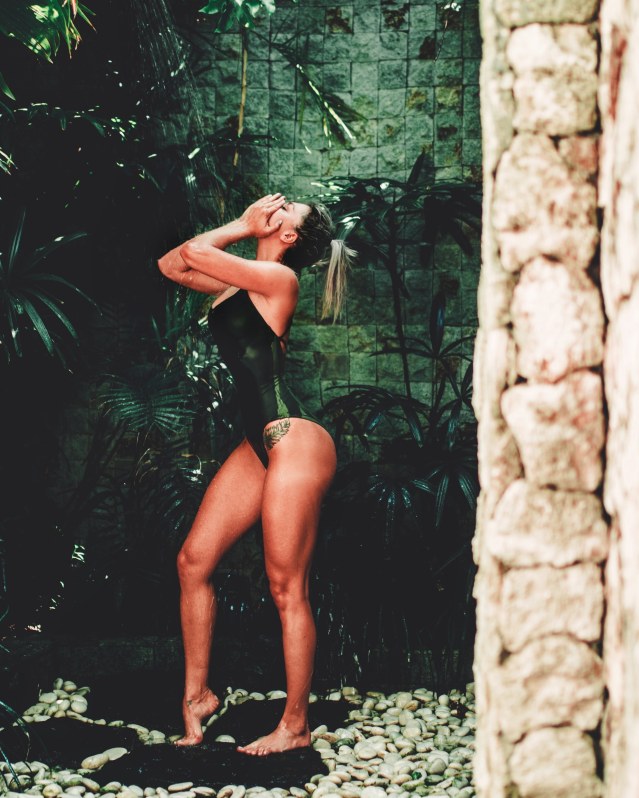 Despide our tiredness, we decided to do a quick HIIT sesh upstairs, where the yoga sessions were being held and jump in the pool after that. We got some sun and a little rest for the rest of the afternoon.

In the evening the rest of the staff and the other inhabitants arrived. We realized we were lucky to meet some of the friendliest people on the planet. Dinner was served later on. The open kitchen and the area were very inviting and conversations we had with the others were more than interesting and funny.

By the end of the night, we made friends with everybody. Everyone was so welcoming and friendly, especially the staff. Pablo, our ‘Pool Boy’ – so he introduced himself – who was actually the main man in charge for everything running smooth, Roberto, our yoga instructor, and the surf instructors crew.

Everything was so exciting and new, we couldn’t wait for the next day to start..so we finally decided to go to sleep after being awake for more than 48 hours. The next morning we got ready for our first surf lesson. But first, coffee and breakfast with the others. Everything was so incredibly tasty and we were already excited to jump in the water. Our goal was to at least be able to stand on the board by the end of the surf week. After breakfast we went to pick up our longboards for beginners and the other equipment. The crew loaded the boards on the busses and we took off to Jimbaran beach for a 3 hour surf session.  At the beach the group was offered surf lessons and guidance. As total beginners we went with the surf lessons and learnt the drills in the sand first. After a while it was time to put in practice what we just learnt. Our surf instructors took all our anxiety away, making jokes, laughing a lot, telling us over and over again: “Don´t worry, be sexy!” There was nothing but only room for excitement, adventure and fun left. I paddled out into the open waters and waited in line for further instructions. We were waiting for the next great wave. I guess I heard these lines a thousand times that day: “Ana, are you ready? Paddle, paddle, paddle! Faster, faster, faster!” I can´t describe the feeling when I first caught my first wave.. Everybody was cheering and laughing and having a great time. Simply beautiful. Needless to say, the Bali vibes hit me right in the feels and I got hooked and craved for more.

I obviously borrowed the short board for some pictures haha 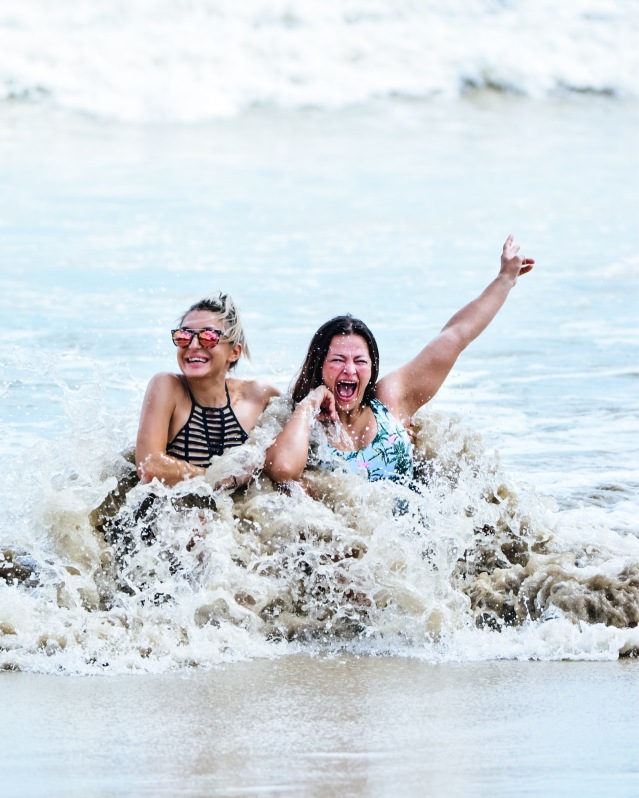 I got to make this incredible experience on my 28th birthday. Seriously, what more can one wish for? The breeze of the ocean in my hair, the sun in my face, the sand beneath my feet and the salty water. 3 hours went by too soon and we took off to “The Cliff”, another accomodation of Rapture Surf Camps in Bali for our first theory lesson with Will and for lunch. 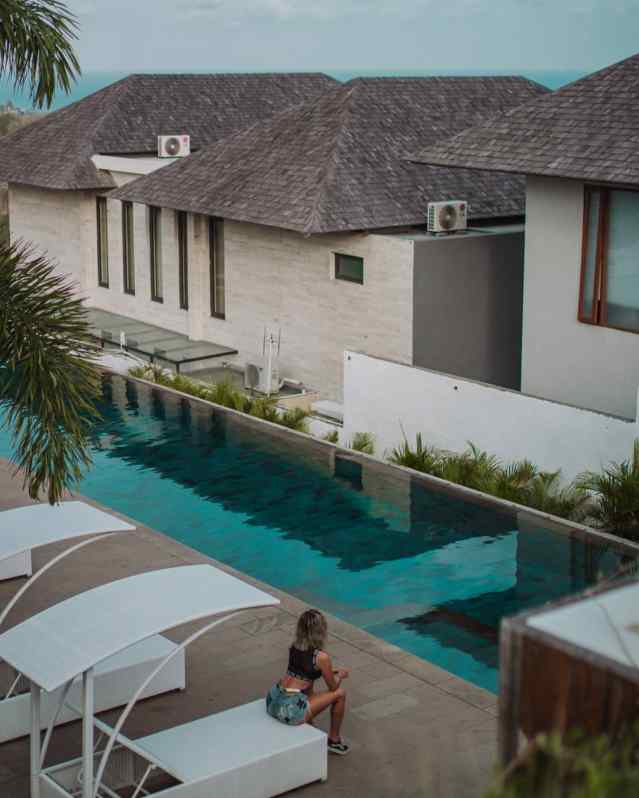 On a screen, he played some parts of the surf session, that was filmed at the beach and he gave us some useful insight and analyzed techniques and individual surf behavior of the participants. After the surf lesson and lunch we went back to our camp, where Lois and I signed up for a yoga session. Hands down, one of the best I´ve ever had. Exhausting, but at the same time so peaceful and relaxing. We had dinner together and shared some good laughs with those around. Turns out, Lois plotted with the staff against me. Kathi baked a lovely chocolate cake and went to buy some wine and after I came back from my room everybody was grinning. Lois intonated “Happy Birthday” and everybody else around joined in. I swear, this was the best birthday gift I´ve ever received.

Another sleepless night with deep talk, wine and cake was ahead. Sleep? Overrated. After a few hours of sleep we woke up, got ready for our next surf lesson and more awesome waves.

them girls doing some yoga before starting riding some cool waves

This time we came prepared with sunblocker, since we already had a sunburn and our skin was peeling off. On set, we were filmed again, to treasure the memories and also, they captioned a lot of awesome moments. We spent the afternoon at the pool, and later on we took a load of pictures from the camp to document my stay. In the evening we had dinner and after that some of us decided to drive to “Single Fin” for a night out. We had so much fun this night and again, the vibes, the people from all over the world we´ve met were incredible.

every sunset at the camp was simply mesmerizing

After another sleepless night we embarked for our third adventurous surf lesson at Jimbaran Beach. We already felt like “pro´s” but Thursday the waves were crazy wild and paddling out gave us all a hard time. Our surf instructors decided we should head off sooner than planned, for our own safety. We were all exhausted and sore from paddling, but it was still a great experience. We went back to the camp for lunch and a yoga session – on a side note, all yoga sessions were included in the fare for the stay. Later on we drove to “The Cliff” for another surf theory session at and later on it was BBQ-night. Such a yummy dinner! Also, I signed up for a massage before sleep. After one hour of being taken care of, I slept like a baby.

On Friday we decided to take off a day from surfing, since we started to feel a little worn out from all intense days and  activities and the lack of sleep, that had piled up. Instead we chose to have a really copious breakfast and enjoying our favorite part: pancakes .We chilled at the pool for some time and decided to explore the area. Pablo, the “Pool Boy” took us to the nearby “Dreamland Beach” that was really a dream beach. White sand and turquoise colored waters. We climbed a cliff to have a better view and to squeeze in another amazing photo sesh before we went down again to chill at the beach.

The waves were crazy again that day and you could barely get into the water, because the strong tide would draw you into the water really quick. Here and there you would see some daring experienced surfers paddling out into the water to catch a good wave. We made our way back to the camp and got ready for the bonfire, that was going on later on at the beach. The participants from both camps took part in this event. The staff came prepared with some Balinese food and our favorite beer “Bintang”, amongst others. As we got there the sun was already setting down. The sunset that day was probably one of the most beautiful sunests I´ve ever witnessed since my stay in Bali, and I´ve seen quite a few. Roberto lit the bonfire that he previoulsy prepared. The fire really added that little extra to the anyway great vibes, that were floating in the air. What a beautiful night. 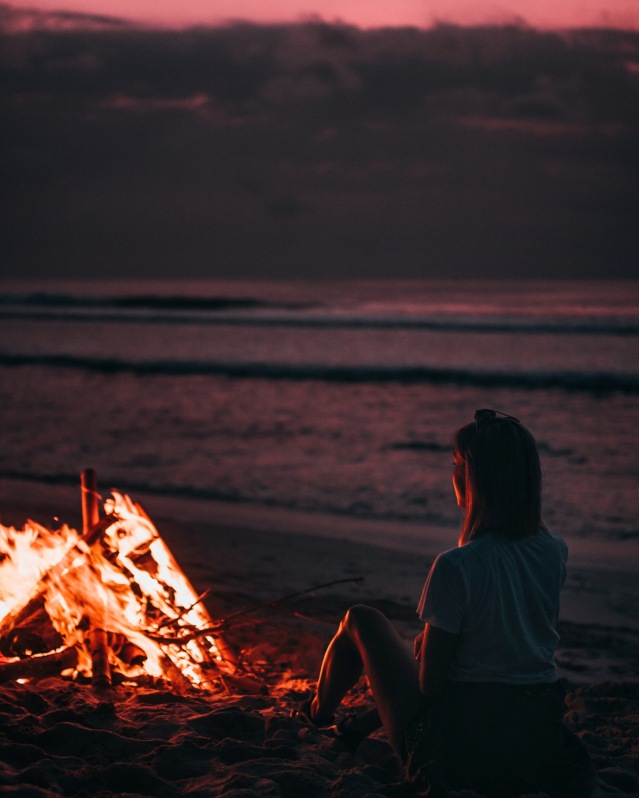 One of our Balinese surf instructors played some sweet local tunes on his guitar. We socialized with participants of the other camp, exchanging the so far made surf experience and some good laugh. After we headed off back to the camp, some of us decided to grab some more drinks at one of the bars. We drove with our rented scooters, which was another fun experiernce I will always remember.

We got home that night, went to sleep in our apartment and took some time for appreciation. We never really spent more than a few hours in there, but when, then we would use the time either on the second floor on the balcony, admiring the sunsets, editing pictures or downstairs enjoying our huge, cozy bed. We always slept like babies and woke up like newborn babies, despite the little rest we had during our stay.

Sunday morning we headed to Padang-Padang beach, were we had our last surf lesson. It was the best day in surfing me and Lois had so far. We caught our own little wave and we were really proud, considering our initial thought of just being able to stand on the board by the end of the week. Yaay!

We split the surf lesson in two parts, since the waves here were a little wobbly …but altogether, it was an amazing day. After lunch and yoga and another photo session it was pizza night at the camp. The pizza was being freshly prepared and baked on site and was actually beyond my expectations, since I am a pizza connaisseur 🙂 That night we went out again to “Single Fin”. So many people went out, it was crazy. The place was packed, the music amazing. On two floors there was music for everyone´s taste. I was trying to shake off the feeling that this would be my last day at the camp and I already felt a little nostalgic.

Monday morning we spent our last few hours with our favorites, Pablo and Roberto and some other free spirits we made good friends with.

We talked about all experiences at the camp and all the amazing people we got to know in this very short period of time. The after the breakfast part was the hardest one. Saying goodbye is something I am not very goot at, and this time was especially hard. I fell in love with the people and it broke my heart to walk away. Pablo, Roberto and Kathi were trying to make it easier. A few tight hugs and kisses later we were sitting in the car that drove us to our next destination:UBUD

Afterword : Rapture Surf Camp is the best place for surfing,connecting and making new friends for life.I’m so blessed to have met so many beautiful souls during my stay.I came to Bali with no expectations at all and I returned home with tons of unforgettable memories and a little heartbroken to have left those beautiful people behind.Thanks for making our stay so special RAPTURE CAMPS and thanks for making me addicted to surfing.

P.S. They have surf camps all over the world: Nicaragua , Costa Rica and Portugal…(guess what,they’re already on my bucket list)

I receved a lot of messages from people who want to learn to surf…guys,this is the place to be !

For bookings and further details check their site out : HERE

← Rosalpina Dolomites : bliss and beauty in the mountains

3 Comments on “one week at Rapture Surf Camp / Bali”